A Mom Walked into a Bar…

B: encourage the waitresses to wear more clothing

C: Break ID laws with confidence and even more honesty

D: Dance like (and hoping, too) no one is watching

I put on all the sequins I own and showered the bride to be with appropriate honeymoon attire as the sister hostess’s recommended drinking wine from a straw and the eggplant. Taking both pieces of advice straight to my belly, I hopped on a party bus with a stomach too full for my outfit and the perfect mix of single ladies and moms of several children. The mom who earlier described herself as an introvert shook what her momma gave her straight up the aisle, and accidentally in my face, allowing the bus to live up to its party descriptor, and making the blaring Blurred Lines song finally a little bit bearable. If Alan thicke jr could have seen the non- offensive fun in her dance he would have ditched his horrible naked lady idea, for sure.

With one piece of bubble gum for every wrong answer, the evening’s bachelorette nearly broke her jaw chewing. In her defense and can someone get her fiancé some comic books, Tarzan is most definitely not a superhero, but, I am quite thankful that “(her) hair?!” is not, in fact, his favorite quality of hers, and for that, she earned her Bubblicious.

Approximately 3 million skinny arm pictures later, the bus arrived at the sports bar full of jerseys and football; its spectators unaware of the phenomenal party, and party attire about to enter.

“I forgot money!” my sister called out.

“It’s ok, I have money, just take out your ID,” I coached my elder.

“ID? I didn’t bring my ID, is that bad?” She moronically replied.

Her defense for the forgotten ID?
“I remembered to bring chocolate.”

So, maybe I sat there calling her an idiot as the bus’ youthful experience taught the 32 year old, mother of six what “pass back” means.

Since blurting out honesty louder and more animated than anyone else is more her thing, she simply approached the 4 bouncers and explained that she would be entering the bar without an ID because she is in fact of age and before they said a word her high heel zebra print shoes walked right on by as she remembered to keep herself hydrated, just like a real zebra, with a, definitely not supposed to enter a bar, water bottle in hand.

I enjoyed my Guinness and the dance floor, rhythm of any sort eluding me. Between our circle of 4 moms, we counted 17 children, confident of no strange men approaching due to high fertility rates and probably also my dancing.

The Bride to be fulfilled her (morally appropriate) bachelorette checklist and with the aid of sisters and my sister, avoided the weirdest and most gag inducing almost dancing of the might as well be called chipmunk dancers for the level of nasty rat involved in the business.

It was a night full of so much fun and getting married is so awesome. And, who needs drama when the bride’s smile and fun can inspire the sweetest season of the bachelorette, ever? 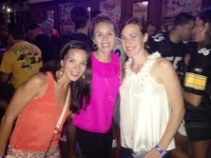 I like to call my pose the “fat arm.” Still working on perfecting its counterpart.