James Witnessed a Crime: He sat in his carseat as his Uncle Dan filled up on gas. Holding a McDonald’s milkshake that his mother would have never bought him, he continued to LOL about the word “poop,” and all of its sounds. The open window provided him with an unobstructed view of the Gas Station interior. As one particular man, described by the witness as a “really bad guy,” approached the coffee counter, he looked to his right and left to make sure, in the words of the witness, “the police weren’t watching.” With no handcuffs in sight, the man then stuffed “at least 3” handfuls of napkins into his pocket. Both four year olds in the car were sure: there is no way he could have needed them for himself, and he absolutely did not ask permission. Alarmed and astonished, the mention of fecal matter was, momentarily, no longer funny. Instead, he finished his milkshake with wide eyes and asked 4,789,435 questions about what in the world that man would do with all of those stolen napkins, how other gas station patrons would be able to wipe ketchup from their hands without enough napkins, and, most importantly, why does God make bad guys in the first place. And as every good first born knows, there is no more efficient way to extend bedtime than asking theological questions regarding the essence of God and his gift of free will to two rookie parents trying to do their best.

Looking for a Circus Discount? Arrive one hour (plus) late and bring with you adorably excited children. Be sure to answer “why are you so late,” with the explanation “new nursing baby.” The ticket sales man might have so much pity that 60% of the show has been denied to the curious and whimsical hearts of the older children that he offers a steep discount on tickets for the parents and allows the kids to go for free because “they missed so much good stuff already.” To make the evening even cheaper, forgo the $14 chicken finger and ask for a small popcorn split 5 ways. Dinner is served as clowns toss fire in the air and crazy people dive face first into trampolines. Then, sit back, relax, and watch dancing elephants inspire the happiest facial expressions on children who are unaware that they missed a thing.

The Police Ruined Curious George: Before George could even make a mess of things, or I could enjoy the 27 minutes of monkey mischief to drift off on the couch, the carbon monoxide alarm began its sounding. Convinced the house would surely blow up if I didn’t start screaming and running out the door, I unnecessarily scared all of the kids as they followed and demonstrated to me my overreaction through their learned behavior. 911 was quick to the scene and so was my husband. As all six of our next door neighbors got wind of “Fire Truck!” my driveway was beginning to look crowded. The fireman exited the house and assured me, several times, that the sensor is broken and that no one will die in their sleep and my headache is attributed to something other than deadly gas. Since 10 kids under 10 were already in the truck anyway, the kind men offered a tour of their sweet ride and curiously asked, “Excuse me, ma’am, but how many children do you have?”

Completely unaware to how much more confusing my response would make the situation, I said, “Oh these kids? Most of these kids aren’t mine.”

Have you been reading the Ten Virtues of Mary? Next week is my week, but all of these other bloggers are way way better, so read! 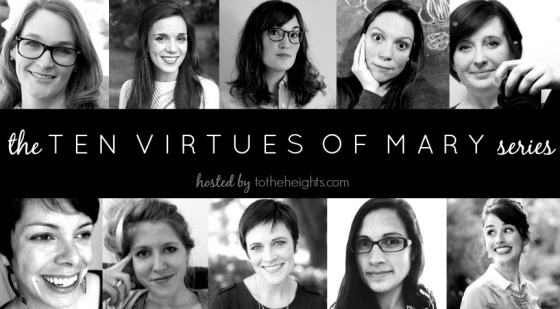 November 4 – Heroic Patience – Kelly of This Ain’t the Lyceum

2 thoughts on “A few Confessions as of Lately”