“Why does it smell like a fish hatchery in here?”

Ever since the first morning we came into the kitchen to find Josie crawling on the kitchen table, we knew she was part baby ninja-magician. The cheerios provided to keep her busy and happy in her highchair while I ran up the steps to retrieve her older brother, dulled in comparison to the bacon and eggs waiting for the rest of the solid food eating family. So when she began hopping out of the crib and to the tippy top of the pantry long before her second birthday, I couldn’t help but say, “I guess I saw it coming,” but pretty please go back to sleep and stop eating entire bags of candy from the top shelf at 5am. Nonetheless, despite the warning signs of her Houdini-esque skills, yesterday’s events will forever top the list of the most repugnant.

It all started with an avocado. Rita ate an entire one the night before. Naturally, it was a pamper bomb of hiroshima proportions. I carried her messy chunky bum to the changing table and began. LIke every good ninja, Josie noticed my weakness and distance. James was occupied with the hose per usual, so she knew his laughter would be of no alarm. Chair pushed, counter climbed, cabinet opened, vitamins found, Omega 3 fish oils targeted. I tend not to worry about the vitamins all too much because they are child proof and she is two. And maybe I should contemplate discontinuing the astute brain pills because it seems like she’s a little smarter than I would like her to be already (this is a joke, i would never). Onto the story… she somehow finagled her little fingers and pop! hundreds of tiny strawberry flavored cod liver oil gel balls blanketed my floor like algae on our tank. I heard the giggle from the table. Its more of a “sound of something bad” than laughter, and I’m confident Simon and Garfunkel could write a good song about it if they spent 10 minutes with her. I slapped on a diaper and ran to find her ingesting so many of them!! I put Rita down (huge mistake!) and tried to clean them up as fast as possible. I asked James to help (also a mistake!) who began to laugh so hard i feared he would accidentally induce vomiting. I frantically raced to get them in the bottle, the garbage can, out of Rita’s hand, into the dustpan, out of her hands, out of Rita’s mouth!!! The cookie monster had nothing on her eating growl, and James’ full body laughing hysterical fit only fueled her rampage. Before I called poison control, I read the bottle and calmed down. No side effects, other than THE WORST SIDE EFFECT OF ALL (other than something that actually could have harmed her).

It began slowly. We went to the pool and I noticed something other than a chlorine stench. Hmm I thought, maybe its an imaginary sea air because we are swimming? In the car, it grew. Maybe its the trash outside? After her nap it was clear that the strawberry flavor to mask the taste does absolutely nothing to mask the horrendous smell that came oozing out of each and every sweat gland in her body. I tried a bath. No, she still reeked. We went outside. Worse than bait. As Jim entered the house, I saw him sniffle from afar. He walked in confused, looked at the stove to see if I was cooking the ocean, and then, turning to me, said “why does it smell like a fish hatchery?” I explained, and he was repulsed. And for the rest of the evening we did what any good parent would do: we took her to our siblings, and parents, and out for ice cream just so everyone else could smell her too. 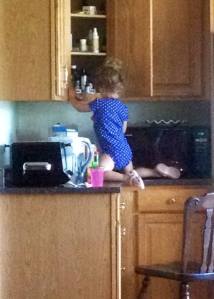 **this picture was not taken during the event described, although it is an accurate display of her skill, determination, and general lack of interest in rules.

Do you have any smelly stories to share? Nothing like a good old stink bomb to start the weekend!

5 thoughts on “Why does it smell like a fish hatchery?”