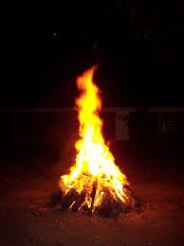 This weekend was spent with my in laws, and on Saturday night we built a bonfire in a Sunday Gospel coincidence, except for the whole daughter in law being against her mother in law part. There is something both beautiful and terrifying about a fire, especially when children out number adults 57/2 (somewhere around 4 million marshmallows were consumed, mostly by Josie.)

The enthusiasm of its fevering flames mesmerize and captivate while its fervor and power repel the gazers from recklessness or out of order behavior, reminding us that if there are any two things that ought to be respected it’s a burning fire and probably also the woman who raised your spouse.

The thought of Jesus using such a powerful force to fulfill his mission is thought provoking. On Valentine’s Day three years ago, my parents house caught on fire with all of us home, and if there is anything that I learned that day its that a route towards safety is something for which to be thankful and to cling. Additionally, Valentine’s Day is the worst.

Fire gets us moving in the right direction, quickly, and with intention. Or else, it absorbs and mercilessly destroys leaving little evidence of what originally existed. To me, this imagery is how I understand the tension between the Peace vs. Division to which Jesus refers in this week’s Gospel. Peace implies a sort of motionlessness, and maybe even complacency. Fire, however, gets the behind bouncing, causing division by necessity, for the reality is sort of simple: run towards safety of the truth, or get burned.

As a mother of three, with a household of five, division is something to which I relate. The transition from man to man defense (parenting two kids) to zone defense (three children), is one in which my husband and I sometimes end up punting, often with zero points on the board, and if there is anything that leaves my love for God and family sizzled and burnt out, its that. Yet it’s the struggles and division that often show us where our weaknesses are, and how much we need God to be #1 MVP, or else, we too will be left consumed by something other than the fiery love of our creator.

It’s also in the dividing times that we yearn for a clearer direction, which hopefully draws us closer to the Big Man. So this week, may the love of God fuel our family life and mesmerize our hearts, scorching out the bad, and igniting the ambivalence. And, when I burn dinner, I’ll consider it living the Gospel.

(and as far as Mass grades go, James and I braved the big church together while Josie and Rita took advantage of the cry room with their father due to poor attitudes and uncontrollable 10 month old yells. He gets an A for participation and thoughtful questions even if he was unaware of the high volume of his voice when asking, “But mom, why do you eat Jesus!? That is NOT nice.”)

May your hearts be full and your laundry piles low. And I’d love to hear your take on the Gospel in the comments! I find it difficult to make a real bible study…