The last non essential pair of shoes stuffs its way into my suitcase several minutes past midnight. With the 4am wake up call looming, I forgo the third pair of high heel wedges and 7th maternity maxi dress and slip into bed. While I can’t be certain,  I believe its about 17 seconds after I calm my travel anxiety, which is mostly concerned with “will I have enough to wear?” and begin to doze that the intruder alarm began blaring through the entire house. “Yes of course we want the police! I’m a million months pregnant and already naturally paranoid!” Several police officer’s assurances later, I decide to quit checking for robbers underneath my bed. I then claim approximately 45 minutes of mostly interrupted sleep with my hands clenching a hockey stick, the only weapon my husband permits in his bedroom which he shares with a crazy person who might one day accidentally use it on him if he rolls over or gets up to go to the bathroom unexpectedly.

In a most shocking rally, we make our flight and only forget to leave several pieces of fresh produce on the kitchen counter to rot for the next two weeks being sure to welcome the entire fruit fly species to feast and infest our entire home. At some point on the plane ride, as she takes a crayon to a favorite passage, I realize Rita has been carrying Flannery O’Connor’s short story collection and The Brother’s Karamozov in her tiny baby backpack throughout the entire airport and has never once complained that her tiny back has been burdened with several unnecessary pounds of her mother’s favorite literature. No one poops on the plane and it lands with ease. With that, and the Florida sun to welcome me as well as seriously swell my ankles, I allow my palms to stop sweating and begin to relax.

Upon arrival, I am instructed to keep the kids inside while the men load the luggage into a tiny fishing boat. I oblige until Rita begins running towards the floating dock, confident in her ability to swim without assistance among big fish. “It might be full of flesh eating bacteria!!!” I warn my one year old, that is of course if Good Morning America’s report on the deadly Florida water is to be held accountable. I may have not given it a second worry, but my mother sat me down on 7, or maybe 9, separate occasions begging me to never even consider touching the clear Gulf of Mexico waters lest I desire a particularly terrible type of death.

As I make my way around the bend wrestling a determined baby and her two siblings, James yells, “Daddy is in the dirty water!” and I notice my husband fully submerged and swimming in his clothing doing his best to wrestle five pieces of our family’s luggage before it fulfills its desire to sink my entire maternity wardrobe to the bottom of the ocean floor forever. My father in law, the smartest man I know, shakes his head and does his best to retrieve our belongings and his very wet son. “We had an accident,” he explains as I realize I will never learn the true details of how so many bags fell into such salty water. Luckily, the suitcase containing Jim’s scuba diving equipment remained completely dry and unharmed by the salt water for which it is designed. I began to repeat the mantra, “things. They are just things,” as we traveled to our final destination by boat, except the words, “MY FAVORITE,” kept getting directly in the way.

Upon inspection, only everything is soaked and mostly ruined. (Rest permanately in peace: all of my makeup). The rest of the things only require dozens of loads of laundry to bring back to a “I think it smells ok?” level of wear, which is pretty much exactly the way a pregnant stay at home mom prefers to begin a relaxing vacation.

Since the Scuba gear remained nice and dry, Jim has no trouble at all spending the next day 25 feet under water catching the night’s lobster dinner. As he eats his catch and teaches our children underwater signals like shark, octopus, and something is biting me, I notice his difficulty to swallow. “Are you sure you aren’t allergic to shellfish?” I ask.

But, we do learn that scuba diving allowed his trachea to partially burst which lands us very much in the ER at midnight, which, even before our arrival, is buzzing with excitement. With the promise of potential legal steroid use to heal his broken organ, Jim is still smiling. Mine begins to fade after a third person asks, “would you like us to get you a bed and make it a two for one deal? The maternity ward is right upstairs.”  Words like “fatso, enormous, still 7 weeks to go, huge, gigantic,” float around in my head, much like the air floating around Jim’s neck and major organs. While they might be less life threatening, I can assure they are much more dramatic and psychologically damaging.

A million hours later, my little scuba diver is cleared to go home with the strict instructions to not swim or lift anything, and definitely no smoking. At 3am I drive my husband to the pharmacy to fill his prescription. With directions to “eat with food,” we ransack every highly caloric, fatty, junk food snack made of shortbread, nutella, peanut butter, and/or crap the drugstore has to offer its midnight customers and head to the check out dazed, and confused.  We are then met with the comment, “looks like some good munchies!!!!” With my pregnant belly directly in his face I nod my head, smile, and sort of a little bit, but not actually at all, wish that were the case and that my husband didn’t actually have escaped air perpetrating his organs and ruining future scuba diving ventures for the rest of his life.

With all of my Debbie Downer out, we make it home and add another 2 hours of sleep to our 72 hour mostly awake record. Thankfully, in a house of 26 of my favorite children, and most of my favorite adults, it takes about 5 minutes to get over it and enjoy the sun, even with the ankles, and the water, even with the flesh eating bacteria, the dinners, even with the particularly high volume, and most of all, the family, the faith, and all the fun that Florida has to offer. 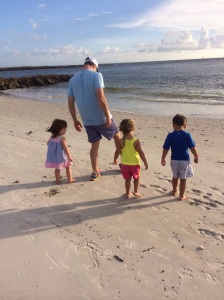 Additionally, with the help of his imagination, James witnesses several sharks eat even more stingrays. Josie learns to swim, and Rita fully believes that she can, too. My curling iron eventually dried out from its Florida swim and once again turns on, and my favorite scuba diver is heals and still my favorite person on the planet. Jim touches a manatee twice, which is apparently, according to Florida environmentalists, punishable by death. Each of us acquires 4 million bug bites, and we brave public restaurants and are only asked to keep it down once. I eat 3 dozen heath bar cookies with only the help of my unborn baby. Oh, and I flood a generous portion of a very nice home when the toilet breaks.

And now, its back to reality where I am about to eat chicken ravioli in the house I own with TRex, Triceritops, Cinderella, and Darth Vador.

Happy Week to you all.

3 thoughts on “Back to Reality: Memories of a Family Vacation”