Approximately 12 minutes after leaving a pre greatest eating day of the year get together at everyone’s favorite massive pasta dish maker’s (my mom) house it happened. Twice I heard, “I’m not sure about all of this stuff on your blog, they seem so laid back!” And twice I wondered if Rita’s adorable mullet prevented notice of her eating and spreading plant dirt on repeat in between trips to sneak a handful or five of chewable dog food pellets, as I denied Josie’s seventh request for a fourth sucker and third ice cream sandwich.  James continued to shamelessly flirt with cousins both younger and older and pretend to play chess after jumping on cousin Patrick’s head on the non sturdy side of the convertible couch was eliminated as an feasible behavior option. Josie managed yet again to go over my head to receive not just a fourth sucker, but also a fifth, and Rita preferred dog food and eating pasta from the floor since the sucker kept getting stuck on her sweater or in between the crease of her neck and mullet.

As we made it home for bedtime, Jim made it his business to tackle bathing the matted slobber/sugar party in the back, as I bribed James to bed with an opportunity to wear his summer dinosaur pajamas out of season AND his one blue, one white lightening Mcqueen socks that are a “coorbinated” pair because “matching is for the girls socks.” He shuffled right up all of the steps after we shook on the final negotiation to the evening’s goodnight contract: permission to continue to wear his Darth Vador underpants.

With my attention on evening attire, and Jim continuing to discover half chewed dog food pellets from the baby’s diaper area, Josie enjoyed a few free to be a natural born hippie moments. 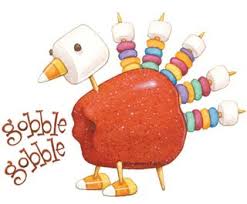 James, while snuggling up to the blond love of his life in preschool this am, made something similar. Not only was it a proud moment in his creative marshmallow decorating skills, but he dedicated his masterpiece to his pint size sweet heart. And since a few days ago he threw himself head first on the ground because he could not marry her yet, the tooth picked stabbed turkey apple was a mighty important love memento for his hopelessly romantic heart.

As a mother, I will keep it fair and also acknowledge the importance of Josie’s own love affair. While hers is less about a person and more about the irresistible essence of white fluffy sugar made to look like a small pillow, I can see how it would have been difficult to simply allow that apple to continue its reign as James’ crush King, displayed as the kitchen table’s centerpiece. There she was, her curls in an interesting frizzy/matted state, remnants of stolen chocolate still left on her face, her hand unable to control its magnetic attraction to the apple’s toothpick crown. I imagine her first encounter with the fluffy sweetness as reminiscent of Frank the Tank’s decision to “just do one,” and spend his Saturday morning at Bed Bath and Beyond. 17-20 miniature marshmallow bongs later, the evidence was undeniable.

Despite the confidence Darth Vador’s image on the bum of a young boy brings: destroy his edible art made from the depths of his budding masculine romance, destroy his life.