The little trick Josie pulls off to hop out of cribs is also the trick she attempts at church to hop over pews and run away. I turned around to find her straddling the back pew giggling, saying “horsy, horsy, I ride horsy.” She hopped right on over to the other side before I could put the baby down to stop her. Through the doors and into the back she went, worrying little as to if anyone would follow. I thought about letting her go until I saw the faces of those around me: eyes wide, jaws dropped. To the back of church I went to retrieve my hippie daughter.

We went to Red Lobster for Dinner. 6 adults, 9 children. My father requested, and since it was the continued celebration of the day dedicated to dad’s, we piled in, and ate out. The hostess was less than amused, and the waiter asked for two helpers. They stuck us in a back room as far away from the other patrons as the restaurant layout allowed. 4, 376, 346 crayons covered the table. 4, 376, 347 cheese biscuits were consumed within a 36 second time frame. James wanted them all and cried because 8 others said no. Josie told the waitress to bring her macaroni and ice cream as soon as we sat down. Rita grabbed a cheese biscuit and squeezed it to death out of excitement. Jay grabbed a hold of a live lobster. James asked if that’s the one that they would eat. I tried to explain that Red Lobster doesn’t really work that way, but, I realized I was being a giant fun sucker. My mom sang happy birthday to my brother who lives 3,000 miles across the country and videotaped it to a text message. The concept of a birthday celebration by proxy was confusing to most present, but, I do believe the free ice cream deal still counts. My apologies to whomever is in charge of sweeping. And I do believe James and Josie explain what its like to eat at a Red Lobster best with “I’m going to poop in the car!!” all the way home. Ceaser salad, no dressing was a good choice.

And speaking of healthy eating, as I write this, I’m drinking Brooklyn Brown Ale with a side of mini chocolate peanut butter cups and Frosted Flakes.

I thought maybe I heard something upstairs, but I decided I was crazy because they wouldn’t dare get out of bed again, not after the 100th time, when I was sure they were so super tired. When I went up to wake up James from nap, I began to hear the giggling whispers from two children who were supposed to be sleeping. I paused and took a deep breath. As I opened the door, I encounters a flood of Noah proportions, and I froze. Their eyes had a small amount of fear in their wideness, but, mostly, there was just too much pride gleaming for the 35 minutes they had successfully made a mess without me finding out. I breathed again. In and out. I turned off the water, and took away the bucket, Then, I left, for their safety, and my own. When JIm received the “almost as bad as poop in the basement” text, he knew, and understood why I sat staring with my knees tucked inside my sweatshirt, and head buried. I’m not sure how he handled it or what he did, but, I’m pretty sure they won’t ever do it again.

When I first heard about my father in law’s strategy of using a neck tie to tie the little ones in bed, I thought “that’s crazy, I could never do that.” In a moment of desperation, I tried it. He’s a smart man, and I’m entirely too judgemental.

James confused having a tick with being murdered. It took 4 adults other than me to hold him down to get it out. I was in charge of the bum area. By the end of the removal, I was sore and sweating. Either its one strong bum, or one weak mom. Jury is still out.

And this is what most of my afternoons look like. 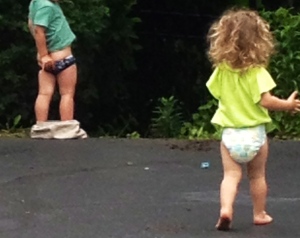 Grace at Camp Patton pointed me towards, “At least my belly hides my cankles” by Paige Kellerman, a fellow confessing mom who also loves Jane Austen,  and it really made me laugh.

May your naptimes be long and your tantrums short.