His crossover into oldness became more apparent as he bordered offense at my confused reaction. “It’s a big year for me,” he said. “Why?” I replied. “i’m turning 30…” I thought about letting it go, but, I don’t let anything go. “Jim, you are turning 29…” “No, I’m 29 now, you are 26, and I’m turning 30.” “Actually, I’m 27, you are 28, and you are turning 29.” 29, 85, what’s the difference? I made it worse by quizzing him about our kids birthday’s. At least he got our anniversary right? Memory or not, his humility, friendship, loyalty, and love are pretty much the best, and I’m crazy happy he was born, no matter the year.

His first day as a real 29 year old began with my waking at 6:10 because Josie took off her diaper that was full of a massive load of something that a 2 year old should never be holding or waving around. James’ giggles at Josie’s reckless abandon diaper swing were difficult to sleep through, but he managed. I nearly burned the chiliquiles 47 times, because cooking chicken at 6:20am while nursing and dealing with the “it’s time to light the birthday candles now!!!!!” tantrum of the century is entirely too difficult before coffee and after one of the worst hockey games of all time (get it together, Pens), and additionally, no matter how much Jim wishes, my heritage is not of a mexican chef descent. It was a morning where under any other circumstance other than a birthday, I would have been yelling “Jim!!!!!!!!” better and louder than any other wife of three small children. But, birthday’s trump frustration, so I burned, and coddled, and “Josie, please use your words,” and “James get out of the refrigerator,” on and on and on. He pretended the breakfast was delicious, and spent the day graciously accepting happy birthday! texts, calls, and greetings. They fed him scones, and made a fuss, and he was embarrassed and wished he had said his birthday was a “non-school day,” on the birthday calendar. I braved Barnes and Noble to scour a good book as a gift from the kids. Barnes and Noble is hands- down- hard the worst place to take a kid, or maybe just my kids. Quite literally everything, including a lot of breakable things, is at a skillfully- marketed- small- child- hands- reach. James found the only remote control car in the book store, and given Jim’s reaction to the toy helicopter he got for Christmas, I bagged the book idea, and went with the overpriced toy. Let’s be honest, he only reads NHL.com anyway. Josie managed to pick out the nastiest looking cake of all of baked goods, and I probably should have said “no,” but how many times will I come across a hamburger cake? He had a weird mix of his favorite foods snack waiting for him, and the kids threw the car into his lap as soon as they could rip it open when I wasn’t looking. Their reaction to his playing with it is one of the top five moments of the year. My only apologies go to Rita because a crawling baby and remote control race car can be an unfortunate combination when James has the controller. He asked for pasta for dinner, because his generosity overfloweth and he knows it the easiest thing for me to make, and the most agreeable dinner for the kids to eat. I took a stab at homemade sauce because, I felt sorry for his birthday meal. We carried on his side of the family’s bday tradition of showering the guest of honor with reasons why we love him. Rita’s babbling came from her heart, Josie’s smile needed no words, and James’ “because I do” struck a real chord. When asked what his goals are for the last year of his twenties? “I hope I’m 30 before we have 4 kids.” I think he was kidding, and I hope so too, not because I’m pregnant, but because we don’t have the greatest track record, and I really like babies.

Wishing my husband a very happy day after his 29th, not 30th, birthday. If I ever make it to heaven, I’ve got you to thank, Jim. 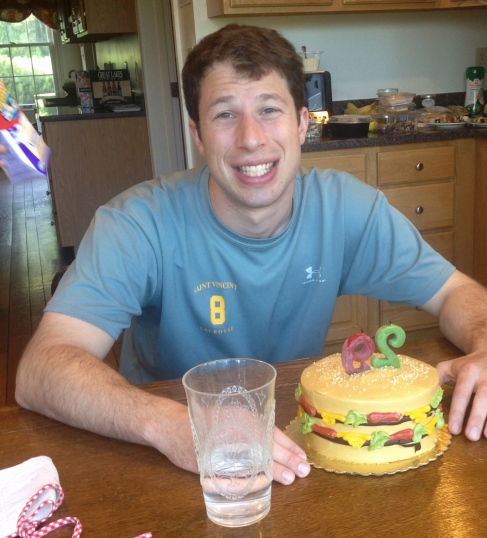 3 thoughts on “Happy how ever old you are.”